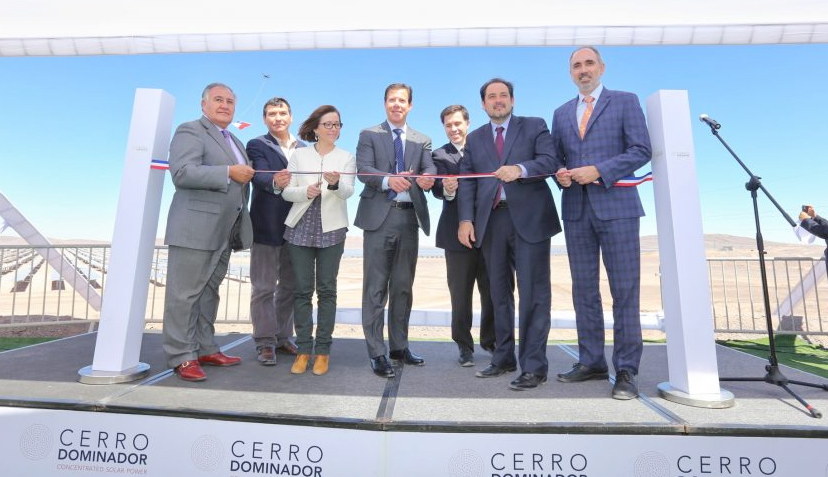 The photovoltaic unit of Cerro Dominador, one of the most relevant Non-Conventional Renewable Energy projects in the country, has started delivering its electricity to the grid, with the presence of national and regional authorities.

With this commissioning, the first key construction milestone of the project is reached.

August 25, 2017. María Elena – Calama. With the presence of the ministers of Energy, Andrés Rebollledo; and National Assets, Nivia Palma, in addition to regional and local authorities, the Cerro Dominador solar project connected the firsts 62 MW of its photovoltaic unit, fulfilling the schedule established since EIG Global Energy Partners took over.

“We are very proud to have completed the first major phase of the project, a project which is tantamount of sustainable development. We expect the entire solar plant to be operational by 2019”, Fernando Gonzalez, CEO of the project said.

This initiative is integrated into the Chilean national program for renewable energy development, designed to provide a cleaner energy future for Chile, while boosting economic development and reducing its dependence on coal and other fossil fuels. Chile aims to achieve 20% of its electricity production through clean energy by 2025.

The Cerro Dominador project has two units under construction: a 100 MW photovoltaic and a 110 MW solar thermal power plant, which will be the first thermosolar plant in Latin America. Both plants are complementary, having the possibility of generating energy 24 hours a day.

The project, located in 1,000 hectares at the heart of the Atacama Desert will benefit from the highest solar radiation in the world.

“We estimate that the photovoltaic plant will be fully operational by the end of 2017 and the solar thermal plant during 2019”, added Mr. Gonzalez. The photovoltaic unit will consist of 392,000 panels that will capture the energy of the sun and will transmit it directly to the grid.

Cerro Dominador solar thermal plant is the first thermosolar plant in Latin America and will be operational in 2019. This will have 10,600 heliostats with a total area of more than 700 hectares. Heliostats concentrate the solar radiation at one point, the receiver, located at the top of a 250-meter-high tower. Radiation from the sun heats molten salts, that are used to generate steam to feed a 110 MW turbine, that generates clean electricity.

In addition, it will have a pioneering system of thermal storage that gives this technology a high degree of dispatchability, being able to supply electricity in a stable way 24 hours a day and allowing to respond to all periods of energy consumption demand. It is also the only plant with this construction progress in the region.

The entire project as a whole will avoid the emission of 870,000 tonnes of CO2 per year and will meet the energy demand of the population and industry thanks to the combination of both technologies.