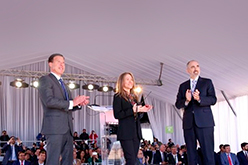 The plant will begin operation in early 2020.

The Minister of Energy was among the visitors given a tour of the progress in the construction of the Concentrated Solar Power Plant that includes a tower 250 meters high, making Cerro Dominador a pioneer initiative not just in Chile, but in all of Latin America.

María Elena, August 2, 2018. In the presence of Susana Jiménez, Minister of Energy, and José Ramón Valente, Minister of Economy, Cerro Dominador began the last phase of construction and gave a tour of the progress in its Concentrated Solar Power Plant (CSP) that will have a 250-meter tower where the receiver will capture the heat reflected from close to 11 thousand heliostats surrounding it.

This announcement came after the company closed a financing agreement in May of this year, giving it the support of banks, mainly international ones, that attests to the technical quality of this project and the soundness of our company, which has fulfilled all its commitments in this period.

“The first solar thermal plant under construction in Latin America begins today its last stage of construction, consummating a project that has been the desire of many since the actual project sponsor took over, a bit more than one year ago,” was the statement by Fernando Gonzalez, CEO of Cerro Dominador, the local company controlled by EIG Global Energy Partners.

The solar thermal power plant will add 100 MW of capacity to the 100 MW of the photovoltaic plant already in commercial operation.

The investment in the project exceeds US$1.4 billion and is one of the main energy investments in the process of implementation in this period.

The CSP can store heat for 17.5 hours to thus generate energy 24 hours a day, which makes this project unique among the unconventional renewable energy (URE) initiatives existing in the nation.  This stage of the project will be built by a consortium formed by Acciona and Abengoa.

The complex is located in the municipality of Maria Elena, 60 kilometers from Calama, and will avoid the emission of around 870,000 tons of CO2 per year.

According to Cerro Dominador’s CEO, Chile is becoming a leader in solar technology, not only in Latin America but around the world.

The project has become an icon for progress in solar energy in Chile and for the country’s efforts to become a solar power.

How the Plant Works

Energy is captured through more than 10,600 heliostats (large mirrors), concentrically arranged on land measuring more than 700 hectares.  The heliostats follow the sun’s path, moving on two axles, and they concentrate radiation in a receiver located in the upper part of a tower installed in the center of the circle.

The tower will be 250 meters high and the second highest building in our nation.  The receiver heats a current of molten salts to a temperature of 565ºC that are stored in a series of tanks at the foot of the tower.  These salts are stored and later used to generate steam that creates electrical energy.  The cold salts are stored for later reheating in a closed circuit.

The heliostats or mega-mirrors have been assembled by women from the municipality who were trained and hired under the “Espejos” program.  This initiative stands out for its local contribution.